It doesn’t matter whether you’re launching an e-commerce business or not; the tips we’ve got for you will come in handy. The business world has well and truly turned into an online marketplace, and some companies have taken major advantage. They’ve done it through expert knowledge, lots of experience and ruthless tactics. These are the best of the best companies out there, and if you’re lucky, you might achieve the same success before long.

So, here are ten lessons that startups can learn from these ultra-successful businesses.

Customers Are The Key

We’ll start with focusing on customers, and you’ll find this advice from a multitude of businesses. While low prices are important, customers are just as interested in getting a good purchasing experience. What’s the best example we can give here? What about Amazon? We’ve all heard of Amazon, and they strive to provide the best prices and service for their customers. As mentioned at shipgooder.com, the company’s mission statement includes much about this. “We seek to be earth’s most customer-centric company.”.

Never, Ever Give UpThere will be times when you want to give up, and that goes for many successful business owners out there. Let’s take a prominent example for this point in the form of Alibaba’s Jack Ma. He has failed in all sorts of areas throughout his life. He has been turned down multiple times for universities and struggled with Alibaba in the early years. The most important thing in his mind was that he never gave up. Eventually, Alibaba presented itself as a mega-successful company.

Just look at this good read by MoneyMorning.com for an idea of how attractive his business has become for investors!

Make It A Social Experience

The world of the internet has become a very social place over the last few years. Smartphones are dominating the technology world, and social media platforms like Facebook are massive. This is why you need to make sure that you’re getting involved, too. We’ll take a page out of forbes.com’s book with their article regarding this. They mention a company called Rent The Runway, allowing women to rent designer dresses. To make the experience easier, they developed an app and included social integration on their website.

Time Is Of The Essence

We’re not going to draw off of any particular example with this one. Time is of the essence for any company. If a business is successful, you better believe that no one is sitting on their hands. Most of their businesses use time metric data to help them get ahead. They have made sure that they cut down on wasted time through clever tactics. If you’re procrastinating on a daily basis, you’re limiting the potential of your business.

Let’s take a look at Lazada for our next point. This is a company based in Asia that built up a powerhouse of an online shopping platform. They did this through convenience, offering customers an easy purchasing experience. It offered excellent customer service, multiple payment methods and much more. Importantly, it developed a trustworthy reputation, ensuring that customers returned again and again. Customers want convenience, and if you can offer it at this level, you’re onto a winner.

If you’ve ever heard of Etsy, you’ll know that it’s an online crafts marketplace that has become massively popular. It did this by attaching onto the right trends at the right times. There have been businesses in the past that didn’t do anything wrong per se, but they didn’t launch at the right time. The market wasn’t there, and unfortunately for them, they suffered as a result. Etsy knew exactly when to strike. In the process, it turned itself into an internationally recognized company.

Sometimes, failure is inevitable. At least, that’s what most people will tell you. GoPro’s Nick Woodman would tell you something completely different. He failed twice with business ideas before launching GoPro. He admits that it scared him that failure would occur once again, so he made sure it didn’t happen. He put in the work and did what it took, and it resulted in GoPro exploding in popularity. What’s the lesson here? Never underestimate yourself, and continually put in hard work to realize your potential.

You Need That Personal Touch

We’re jumping over to www.imaginovation.net for our next source of inspiration. We’re taking this from the founder of Rakuten. He suggests that many online companies don’t carry that personal touch. “Our approach to e-commerce is quite different from that of Amazon and many other companies. I think of those competitors as vending machines: They are hyper-efficient supermarkets with standardized offerings. That’s not an approach that excites me.” While professionalism is important, that extra personal touch might just be your key to success.

We already mentioned about the power of social media. One of the best ways to get seen via social media is to go viral. That isn’t as easy as it sounds, and you’re going to need to educate yourself on how to go about it. Still, if you think it’s a waste of time, Michael Dubin would disagree with you. The Dollar Shave Club owner used viral videos to promote his company and get it seen by more people.

Don’t Focus On Destroying The Competition

It might be tempting to look at your competition in a negative light. They’re competing for profits, after all. However, we’re going back to Jack Ma at Alibaba for our final piece of inspiration here. He suggests that the competition shouldn’t be seen that way. He uses a Tai Chi philosophy to operate his business. “Business is not a battlefield where you die or I win. Even if you die, I may never win. It’s about fun”. What can we learn from this? Have fun in the spirit of competition, and focus on developing your company first and foremost.

The next time we do an article like this, we want your name to be mentioned. Good luck! 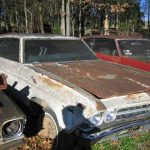 Getting a “Barn Find” Up and Running